In 1968 Big O Posters of London published a work by Australian artist Martin Sharp (1942-2013) simply titled Vincent. It was a spectacularly psychedelic poster in vibrant yellow and orange which paid homage to the artist Vincent van Gogh (1853-90). The April 1973 edition of London OZ magazine went so far as to describe it as "Flower power craziness. A mindblower." The work was a somewhat chaotic reflection by Sharp on the inner torment of van Gogh, who committed suicide in 1890. Channelling the Dutch painter, Jackson Pollock and the Surrealists, the Australian produced a work of vibrant intensity, with swirling lines of yellow paint and star-like drops of similar colour on an orange background. Yellow flowers including daffodils and daisies filled out the illusory three-dimensional image, whilst in amongst the splashes of paint could be seen nine van Gogh self portraits. As elements of collage, all are as originally done, with only three exhibiting additions by Sharp. The first is the large, central portrait overlain in part with the surreal, disembodied eye which often featured in Sharp's work during the 1960s. Within this is a small portrait of van Gogh at his easel, with a yellow halo and word bubble off to his right. Above this is a smaller portrait wherein Vincent wears a hat and a strange set of surreal protrusions form glasses upon the face. The whole artwork extends to the very edge of the paper, with some rows of small, stumpy protrusions suggestive of a border around three edges. A large, dark yellow sun is barely visible in the upper background, amid the cacophony of cut paper, pen and paint.

Vincent van Gogh's iconic starry, starry night vision is, for Sharp, re-imagined as a phantasmagorical, psychedelic collage, though in this instance heightened by the effect of hallucinogenic drugs such as LSD, marijuana and hashish. It is interesting to compare Sharp's homage to van Gogh with that artist's physical, psychological and pharmacological state near the end of his life, when his art was its most profound. The Dutch painter's mental illness had been treated by his physician Dr. Gachet with the drug Digitalis, which causes one to see in yellow or yellow spots. In addition, the use of lead-based paints can also lead to a related poisoning which results in seeing light as circles and halos around objects. Such were the circumstances which some would suggest gave rise to classic works by van Gogh including Sunflowers (1888) and The Starry Night (1889). Though not psychedelic as such, their bright colouring and proto-surreal nature sat well with the young Modernists and Pop artists of the Sixties, including Sharp.

The psychedelic nature of the Vincent poster is revealed through the fluidity of the lines of colour and the bloated font used to spell out the artist's name, along with the complexity of the motifs and the disorder evident throughout. Contemporary descriptions of LSD trips commonly referred to distortions of space and time within a multicoloured environment which was frenetic, electric and continually on the move. Sharp's posters and graphic art for London OZ magazine from 1967 through to early 1968 reflect this psychedelic aspect. They explode with vibrant colour and a tactile sensuality. This output is decidedly different from that produced during the period prior to experiencing LSD, and from those shortly thereafter when the effects of the drugs had subsided, though memories of the experience remained. The change in his technique and palette during 1967, at the height of this experimentation, was obvious. Sharp moved from highly detailed black and white pen drawings and cartoons, as seen in his Australian art between 1962 and February 1966, through the complex psychedelic works of 1967-8, and on to a more simple style characterised by the use of strong, vibrant colours. This latter style continued through to his death in January 2013, though he did, on occasion, return to psychedelia as, for example, when he updated his famous portrait of Jimi Hendrix, which also originally appeared in poster form during 1968.

Vincent is perhaps the most intense and psychedelic of all Sharp's works. Though not his most successful or famous poster - that honour lies with the iconic Bob Dylan Blowing in the Mind  from 1967 - it is nevertheless one of the most significant artistic references to, and reflections upon, Vincent van Gogh from the Sixties, and no doubt helped in his rediscovery and appreciation by an audience seeking counters to the prevailing culture. Van Gogh was a rebel, an outsider and an artist who was totally committed to his work - values which the young people of the Sixties could relate to, and were pursuing in their own lives as the various cultural and social revolutions played out. The publication of van Gogh's many letters to his brother Theo during this period revealed him as both artistic and literate, providing young artists such as Sharp with direction and guidance as they sought to discover their own artistic vision.

The creation of the original collage painting of Vincent probably took place around the end of 1967 or beginning of 1968. The transition from graphically sharp and angular drawings to more fluid works in paint and collage during that time is seen in comparing Blowing in the Mind with Live Give Love and Vincent. The last two evidence a complex and at times liquid style as a result of Sharp's encounters with LSD throughout 1967. The Dylan poster, with its geometrically precise circles and singular images of the musician, is less chaotic than Vincent. It was also one of Sharp's first London-based poster designs, evolving throughout the latter part of 1966 and based upon an earlier work done in Australia.

Martin Sharp had been a fan of van Gogh since he first took up painting and drawing in the late 1950s. He was intrigued - by both the tragic details of his life and the vibrancy and intensity of his output over a relatively short period of time during the 1880s. The Vincent poster of 1968 marked the beginning of a campaign by Sharp to promote the life and work of van Gogh - a campaign that continued through to the end of his life. On numerous occasions he spoke about the artist and referred people to his letters. He also featured works such as the now lost The Road to Tarascon is his art, transposing himself upon that journey as the singular artist, with palette at hand.

The production of Vincent by Peter Ledeboer's Big O Posters came after a series of works by Sharp in 1967 had helped put the company on a firm financial footing. Nevertheless, and despite the nature of its subject, Vincent is one of the rarest of the suite of Martin Sharp Big O Posters issued between 1967-71. Its production took place at the tail end of an extremely creative period for the young Australian. Sharp arrived in London around August 1966 after a brief overland journey from Sydney via Thailand with his friend and fellow Sydney OZ magazine editor Richard Neville. Sharp immediately set up a studio in London, became part of the then happening scene, and, around Christmas of that year had his first experience with LSD. It was to have a profound effect upon his art over the next two years, and resulted in a series of posters for Big O during 1967-8, including Blowing in the Mind (Bob Dylan), Sunshine Superman (Donavan), Max Ernst, Sex (King Kong), Legalise Cannabis and Live Give Love. His work for the company continued sporadically through to 1971, ending with a series of images printed in a limited edition on mylar film and known as S'martiples. The initial Big O print of Vincent was catalogued as BOP8 upon release around April 1968. 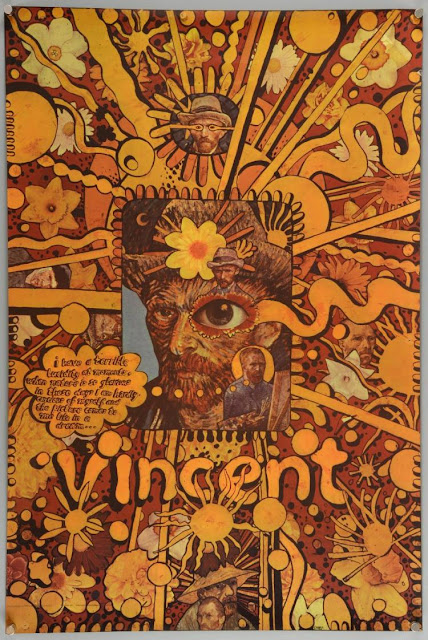 
Its size was the standard 20 inches x 30 inches (49 x 73 cm) and it was colour offset lithographed on thin white paper. The poster was signed ‘SHARP.’ in the image at the lower right edge. A cartoon bubble was included which featured a famous quote by van Gogh:

I have a terrible
lucidity at moments,
when nature is so glorious
I those days I am hardly
concious of myself and
the picture comes to
me like in a
dream…

When the poster was first advertised in OZ magazine number 11 of April 1968, it was listed for sale as ‘BOP8 Vincent 7/6d. 4 colours.’ An original, possibly proof printing included information about the firm in the lower right section, awkwardly printed across a number of the yellow bubbles. Most other Sharp Big O posters had a border or blank space on one edge where these details could be included, though some of the very early print runs bore no such inscription at all. A copy of this proof version was sold by Maggs Brothers, London, in 2013, along with a number of other early and proof versions of the aforementioned posters (Maggs, 2013).

Printer and publisher details on an early print of the Vincent poster.

This text reads (in part): Printed in England by T.S.R. Printers ........ Ltd. Big O Posters Ltd. 49 Kensington, High Street, London W8. 01-937261314. T.S.R. was the firm used to print many of the Osiris series of posters featuring the work of Michael English and Nigel Waymouth (working as Hapshash and the Coloured Coat), plus two of Sharp's during 1967. The reference to the printer and publisher was not present in later reprints of Vincent by Big O, as evidenced by the reproduction in their 1971 It Must Be Art catalogue. That later copy appears decidedly lighter than the initial print run, suggesting that Sharp may have been keen to replicate the brightness of van Gogh's later works, moving away from the dark brown palette of his initial forays in art, as seen, for example, with The Potato Eaters (1885).

According to copies in the State Library of New South Wales collection, the Vincent poster was reprinted in 1990. This was organised by the Josef Lebovic Gallery, Sydney, in connection with the Yellow House exhibition held at the Art Gallery of New South Wales that year. The Yellow House was an artist community set up at 57-59 Macleay Street, Sydney, in 1970 by Sharp, and based on the similar attempt by van Gogh at Arles in 1888. Sharp's venture was more successful than the Dutch artist's, and the facility remained open through until early 1973. The 1990 poster was distinguished from the original Big O version by a thick, yellow border and larger paper size, approximately 73 x 102 cm. It was a colour screenprint in a limited edition of just 99. All of these were titled, annotated "Vincent Poster", and signed and dated by Sharp in ink on the lower left to right of the image. 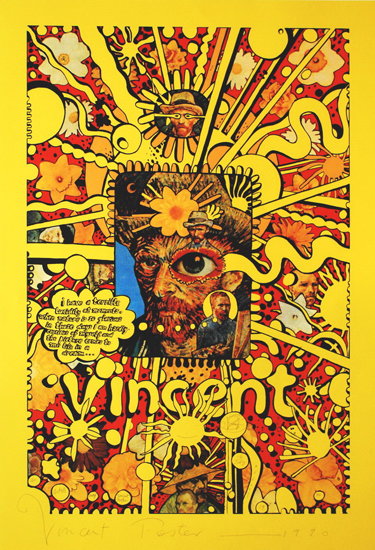 An interesting variant of the Vincent poster was Sharp's Ginger Meggs which used a section of it as the background to a drawing of the iconic Australian cartoon rascal by Jimmy Bancks, surrounded by a number of characters from the strip. It was an offset lithographic screenprint, size 34 x 50 cm, and printed for the Ginger Meggs School of Arts (The Yellow House) exhibition held at the Josef Lebovic Gallery, Sydney, in August 1990, around the same time as the Art Gallery of New South Wales show. 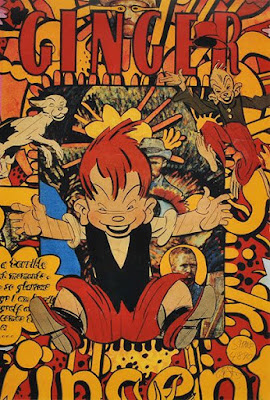 The Vincent poster remains a rarity due to the fact that it was only printed during the Big O Posters run from 1968 through to the early 1970s, and later in the Josef Lebovic limited edition of 99 copies. Despite this, it features in a number of significant public collections, including the National Gallery of Australia, State Library of New South Wales, Sydney, and the Victoria and Albert Museum, London. 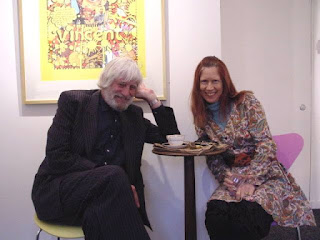